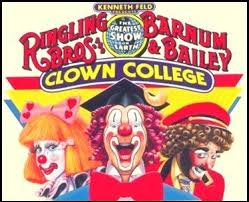 "That's it! You people have stood in my way long enough! I'm going to clown college!"
— Homer, The Simpsonsnote "I don't think any of us expected him to say that."
Advertisement:

Do clowns need an education? Well, at least in fiction they do.

A Clown School is where people go to learn comedy. They're usually staffed by Clowns — the jokey, non ironic variety. The classes there usually range from pie throwing to Puns to other forms of jokes (But never the practical mean-spirited ones). Sometimes used as a punishment for something or other (usually bad grades), or maybe the character thinks that it might happen for that reason.