Boom in the Hand 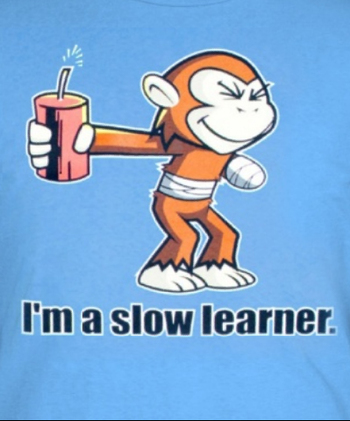 Somebody stop him before he blows off his other arm.
Peter: Quagmire, check it out! I took ten m80s and stuck them all together. I call it Peter Griffin's Bunker Busting Mega Ultra Super—
[the explosives detonate in Peter's hand and everybody screams]
Lois: Oh my god! You blew off all your fingers!
— Family Guy
Advertisement:

When using any kind of explosive, it is important to know when is the right time to start it. It is good not to start it too late. Otherwise, somebody could notice and disarm it. On the other hand, it's also a bad idea to light the fuse before you are even close to ready to throw it.

These guys are dumb enough to ignore the latter reason, and this results in them holding onto a bomb that eventually detonates while they are still holding onto it. This of course means that they'll be the ones suffering the effects of the explosive with their hand taking the most damage.

In video games, this can happen to the player if they are not careful, and they will take damage for it.

Characters who do this are likely to suffer from Explosive Stupidity. Dynamite Candle is also a possibility. Can also occur with grenades if characters decide to Throw the Pin. Compare Where's the Kaboom?, Grenade Hot Potato, Pineapple Surprise, Jumping on a Grenade, Sticky Bomb, and Strapped to a Bomb.

Very much Truth in Television: numerous people are injured every year with fireworks or other explosive devices that detonate while they're still holding them. Don't Try This at Home.