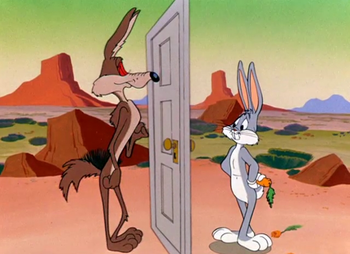 "I'm sorry, mac, the lady of the house ain't home. And besides, we mailed you people a check last week."
Advertisement:

"Operation: Rabbit" is a 1952 Looney Tunes short (directed by Chuck Jones) starring Bugs Bunny and Wile E. Coyote. It is the first of five shorts that feature the pair. It is also the first cartoon to see Wile E. co-star with another Looney Tunes character other than the Road Runner, as well as the first time he actually has a voice actor rather than speaking through signs.(Interestingly, this is actually Wile E.'s second appearance. The first was Fast and Furry-ous with the Road Runner). The short is one of The 100 Greatest Looney Tunes.

Wile E. introduces himself to Bugs, proclaiming himself to be a genius, and states his intent of catching and eating the rabbit, claiming that his attempts to escape and dissuade him will not succeed. Undeterred, Bugs dismisses the coyote and his threats, prompting Wile E. to do things "the hard way." However, as the self-proclaimed genius finds out, Bugs is not only as difficult to catch as the Road Runner, but is also able to turn the tides.