Film / Looney Tunes: Back in Action 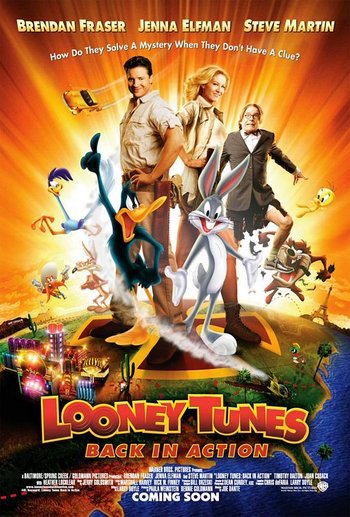 "Ugh, what am I talkin' to you for? All you have to do is munch on a carrot and people love you."
— Daffy Duck to Bugs Bunny
Advertisement:

The second feature film attempt at reviving the Looney Tunes franchise since the fall of the original Warner Bros. cartoons, after Space Jam. Released in 2003, it is another good example of the Roger Rabbit Effect.

Daffy Duck is fired from the Warner Studios and falls in the middle of a search for a mysterious Blue Monkey diamond that the secret agent father of a security guard is also trying to find before the Head of Acme does. Without Daffy, Bugs Bunny just can't do his job, and he heads out across the world with the VP of Comedy to retrieve him. Brendan Fraser and Jenna Elfman star as said security guard and VP, Joe Alaskey voices both Bugs and Daffy, and Steve Martin is a live-action villain who is the Head of the Acme Corporation that apparently invents all the malfunctioning devices known to cartoon-dom. Joe Dante directs. Eric Goldberg, who animated Aladdin's Genie, directs the animation.

Rumor has it that Dante made this revival in response to his deep hatred for the previous film incarnation, calling this the "anti-Space Jam". Ironically, its working title was Spy Jam, and had an action-oriented, James Bond-like feel to it, instead of spoofing sports movies. It also was going to star Jackie Chan. The secret agent story remains, but Bugs and company are Animated Actors under contract at the Warner Studios lot, instead of otherworldly residents separate from our own. Rather than make all of them friends, they cast Elmer Fudd and the other supporting Tunes as enemies of Bugs and Daffy, several of which live around the world.

Financially, it performed far worse than Space Jam. It's estimated that Warner Bros. lost between $60 million and $80 million on the film, making it one of the biggest box office flops ever at the time — the series of brand new theatrical cartoon shorts were all canceled including ones that were already finished. Some also claim that the failure of this movie is the reason why Cartoon Network stopped airing the original Looney Tunes shorts regularly. This film made the company realize there doesn't seem to be any clear future for the Looney Tunes, except for the occasional television special, a faithful new TV series and some controversial updates

(at least until Cartoon Network aired The Looney Tunes Show, but even that was short-lived). Despite this, fans have been known to state that this movie is much better than Space Jam, bringing the characters back to their roots, and has gained a cult following on DVD. In fact, many claim one of the main reasons the film failed at the theaters was due in part to the lousy marketing of Warner Bros, and, considering their treatment of The Powerpuff Girls Movie the previous year and The Iron Giant three years before that, the claim is not without justification.

Also worth noting that this is the last film to be scored by composer Jerry Goldsmith before he passed away after a long struggle with colon cancer (his illness actually kept him from completing the film, with the final reels scored by John Debney). It is also the final film appearance for Peter Graves.

Looney Tunes: Back In Action contains examples of:

Played straight and then parodied in true Looney Tunes fashion...

Played straight and then parodied in true Looney Tunes fashion...