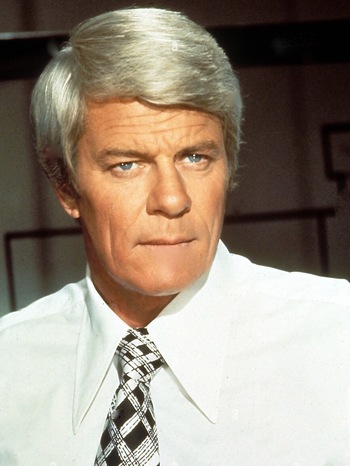 Peter Graves (born Peter Duesler Aurness; March 18, 1926 – March 14, 2010) was an American actor known for a variety of work in both film and television. He's best remembered for starring in the two Mission: Impossible TV series, in which he played gruff team leader Jim Phelps for six seasons of the original series and both seasons of the revival.

He was the brother of James Arness of Gunsmoke fame.

Graves was a native of Minnesota, which may or may not be coincidental to his many appearances in movies mocked by Mystery Science Theater 3000.

Graves also appeared in a movie mocked on The Film Crew titled Killers From Space, and a spy film, Missile X: The Neutron Bomb Incident, which was mocked by RiffTrax.

Known for being a dramatic actor, Graves was cast against type as Captain Oveur in the comedy films Airplane! and Airplane II: The Sequel.

He lent his distinct voice to his role as the original host and narrator of the A&E series Biography in the late '80s and early '90s.