Film / Beginning of the End 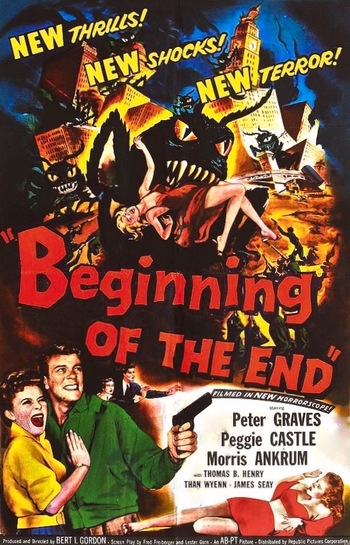 A 1957 Sci-Fi Horror film about giant locusts, directed by Bert I. Gordon and starring Peter Graves and Peggie Castle.

When a small Illinois town vanishes off the map in a single night, Intrepid Reporter Audrey Aimes (Castle) swoops in smelling a scoop. Ordered by the National Guard to sit on her story pending approval from the government, she begins investigating the goings-on, leading her to a U.S. Department of Agriculture farm and Dr. Ed Wainwright (Graves), who's been trying to eradicate world hunger by developing a greenhouse full of atomic-sized fruits and vegetablesnote By which we mean vegetables grown to enormous size through the use of atomic power, not vegetables the size of atoms—which the local insect population keeps breaking into.

Continuing the investigation, Aimes and Wainwright eventually make a discovery: LOCUSTS! BIG ONES!! Irradiated by the good doctor's atomic plants, the local locust population has been transformed into a Nigh-Invulnerable swarm of eight-foot-plus bugs of DOOM! The giant bugs begin chowing down on (postcards of) the Illinois countryside and working their way toward Chicago, while Wainwright tries to figure out how to stop them.

Beginning Of The End provides examples of: