Film / It Conquered the World 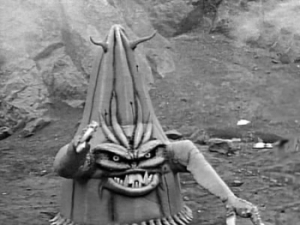 It conquered the world. No, really.
"He learned almost too late that man is a feeling creature... and because of it, the greatest in the universe. He learned too late for himself that men have to find their own way, to make their own mistakes. There can't be any gift of perfection from outside ourselves. When men seek such perfection, they find only death... fire... loss... disillusionment... the end of everything that's gone forward. Men have always sought an end to the toil and misery, but it can't be given, it has to be achieved! There is hope, but it has to come from inside, from man himself."
— Dr. Paul Nelson
Advertisement:
"The monster looks sort of like an inverted ice-cream cone with teeth around the bottom. It looks like a (phew!), like a teepee or . . . sort of a rounded off pup-tent affair, and, uh, it's got fangs on the base of it, I don't know why but it's a very threatening sight, and then he's got a frown and, you know, ugly mouth and everything."
— Frank Zappa, talking about this movie before his song "Cheepnis".

It Conquered the World is a 1956 sci-fi film about an alien from Venus and its attempt at taking over Earth with the help of a bitter-yet-idealistic human scientist. It was directed by Roger Corman, written by Lou Rusoff (with uncredited contributions by Charles B. Griffith), and starred Peter Graves, Lee Van Cleef, Beverly Garland and Sally Fraser. It was originally released by American International Pictures in a double-featured package with The She-Creature.

Dr. Tom Anderson (Van Cleef) has made contact with an alien from Venus that has managed to hitch a ride back to Earth on a military probe. The alien has convinced Anderson to support its plans for world conquest; the alien causes all electric devices in Anderson's area to stop working, and sends parasites to control the minds of the most important people in the area: military commanders and rocket scientists at the nearby base, including both Anderson's friend Dr. Paul Nelson (Graves) and his wife.

It Conquered the World contains the following tropes: