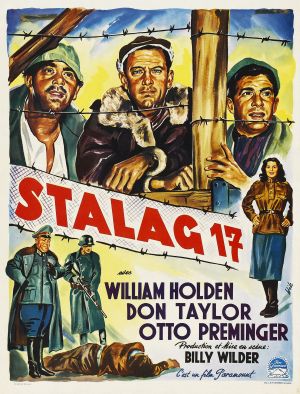 Actually, the girl is barely in the movie...
"There are two people in this barracks who know I didn't do it. Me and the guy that did do it."
— Sefton
Advertisement:

Stalag 17 is a 1953 war movie set in a World War II German P.O.W. Camp, starring William Holden, Otto Preminger, Don Taylor, Robert Strauss, Neville Brand, Harvey Lembeck, Sig Rumann, and Peter Graves, and directed by Billy Wilder. Based on the Broadway play of the same name which in turn was based on the real-life POW experiences of the play authors Donald Bevan and Edmund Trzcinski.

The movie opens the narrator, Cookie (Gil Stratton), recalling the attempted escape of two prisoners, Manfredi and Johnson, whose capture and death cause the American POWs to suspect that a traitor in their midst had tipped off the Germans. The primary suspect is Cookie's friend, the cynical and somewhat antisocial Sefton.

The film is built on a double allegory: the same paranoia that causes the POWs to target Sefton had 1) enabled the Nazis easily to scapegoat the Jews and 2) induced Hollywood shortly before the movie's release to institute the Blacklist scapegoating left-leaning scriptwriters, performers, and others.