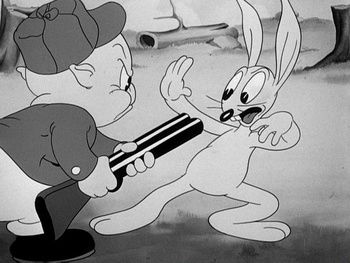 Porky's Hare Hunt is a 1938 Looney Tunes cartoon, directed by Ben Hardaway and starring Porky Pig and an unnamed rabbit who would serve as a basis for future star Bugs Bunny.

The cartoon is centered on Porky Pig and his dog trying to hunt down a pesky rabbit who was stealing from his cornfield, with little success but lots of comical failures.