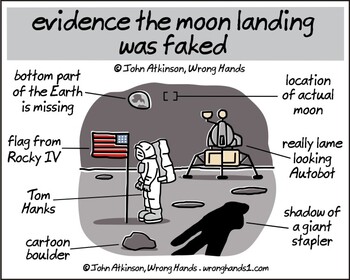 Did you hear about when NASA hired Stanley Kubrick to film the moon landing? Unfortunately for them, he was such a perfectionist he forced them to let him shoot on location.
— Old joke
Advertisement:

The Apollo 11 moon landing in 1969 is one historical event that conspiracy theorists love to... theorize about. The idea of space travel seems so farfetched to some that they would rather believe that it was easier to film in a sound stage because they have no actual means to go to the moon and see for themselves that it happened. As such, the conspiracy itself has been ripe for parody in the media.

This trope is a Historical In-Joke where the moon landing really was staged behind closed doors, or the conspiracy is otherwise Discussed. Generally (as alluded to in the quote above and as shown in many examples below) Stanley Kubrick is depicted as having directed the faked moon landing, usually in reference to his well-known perfectionism and attention to detail, as well as the "realistic" lunar scenes in 2001: A Space Odyssey, shot before the actual moon landing (which actually depict a lunar landscape quite unlike that of the real lunar surface).

NASA really did land on the moon (many times in fact), and there's an overwhelming amount of scientific evidence to prove it. The MythBusters had a lot of fun proving the theorists wrong many times over on this one. The Other Wiki also has a page

which lists the various pieces of "evidence" for a conspiracy, with rebuttals to each. Please keep your wild mass guessing and theories to the Useful Notes page.

Who would've thought that a US government's chainsmoker faked Neil Armstrong's moon landing?

Who would've thought that a US government's chainsmoker faked Neil Armstrong's moon landing?