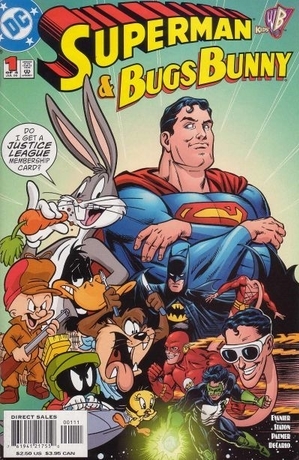 "It's a boid... it's a plane... it's what's up, doc!"
"The team-up you thought would never happen... Archie and The Punisher wish you were right!"
— Archie Meets The Punisher
Advertisement:

There are Crossovers between works or universes which seem relatively logical, thanks to them being not too different. And then, there are these...

A Weird Crossover is an unlikely crossover between works different enough, be it in themes, tones (e.g. mixing something very dark with something very upbeat), genres (e.g. merging a Sci-Fi or Horror franchise with one set in our world, or a specific superhero in a kind of setting he/she is usually not associated with), etc. It can be a full work, but there are many examples using it to create fake movie trailers. Also, there are examples of this trope serving to make a single In-Universe joke, the Weird Crossover work referred In-Universe being a Show Within a Show (or an unlikely project existing In-Universe). The trope is usually Played for Laughs, the joke being the unlikeliness of the crossover.

Of course, Tropes Are Tools is in full effect for these types of stories. A well-written Weird Crossover can be an engaging story that preserves the original spirit of both works in a new setting, while a poorly done one can create all sorts of Glurge and Mood Whiplash that clashes with the tone of the two respective works.

The opposite of Common Crossover, and a specific form of Crack Fic. Canonical (non fanwork) examples turn into Shared Universe. A Super-Trope to Demographic-Dissonant Crossover. Related to Crossover Cosmology. Sometimes leads to Fake Crossover. Can overlap with Intercontinuity Crossover, Massive Multiplayer Crossover, Unexpected Character, and Guest Fighter. When the unlikely combination is a mish-mash of generic creatures or concepts (instead of proper references to specific universes) it's a Fantasy Kitchen Sink or a Sci-Fi Kitchen Sink. Occasionally involved in Real Trailer, Fake Movie. Crossovers between works with very different tones and settings are often a Story-Breaker Team-Up.

The crossover youve been waiting for

The crossover youve been waiting for