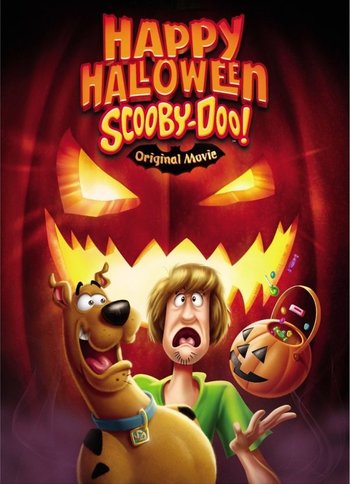 Happy Halloween, Scooby-Doo! is a movie in the long-running Scooby-Doo direct-to-DVD movie lineup written and directed by Maxwell Atoms (The Grim Adventures of Billy & Mandy). In this one, Mystery Incorporated must fight off Jonathan Crane a.k.a The Scarecrow, who has mutated pumpkins into his own savage Jack-o'-lantern army. Helping the gang are Bill Nye the Science Guy and Elvira, Mistress of the Dark. Together, they must save Crystal Cove before Scarecrow's army plunges it into a never-ending nightmare.

Tropes associated with the movie: