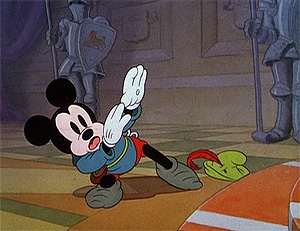 King: Did you kill seven [giants] with one blow?
Mickey: Uh, yes, your honor, and how!
King: ...well, how?
Mickey: I was all alone, I heard them coming, I looked up, and I was surrounded!
King: Yes?
Mickey: They were here, there, everywhere! A whole bunch of them! They came at me from the right, the left, right, left, left, right!
King: Yes, yes, go on!
Mickey: They were coming closer! The fight was on! I swung and missed! I missed and swung! I swung again and again and again! They were right on top of me!
Advertisement:
King: And then?
Mickey: And then, I let 'em have it!
—Mickey Mouse, initiating a highlight of animation acting

One of the finest shorts in the Classic Disney Shorts lineup, based on The Brothers Grimm story of the same name, The Brave Little Tailor (1938) takes place in The Middle Ages, with Mickey Mouse playing the role of the tailor of the title, as his boasts of taking down ordinary house flies land him in hot water when the people mistake his claims to be related to giants and choose him to take down a rampaging giant. He'd still do anything for Princess Minnie, though...

On a side note, the most famous scene is, surprisingly, NOT Mickey's fight with the giant (although that does double as a Moment of Awesome) but rather Mickey describing how he killed the flies, as seen in the opening page quote, which is considered by many an animation nut to be a true highlight of animation acting (and Disney veterans Frank Thomas and Ollie Johnston thought so, too). This is also the second to last appearance of the original "White skinned, Dot-eyed" Mickey Mouse design, the last being "Society Dog Show", and the next shorts "Mickey's Surprise Party", "The Pointer" and Fantasia's "The Sorcerer's Apprentice" using a new design for Mickey from there on out (Though, nowadays, Disney will use the old design when they're doing retraux throwbacks.)

Not to be confused with The Brave Little Toaster.