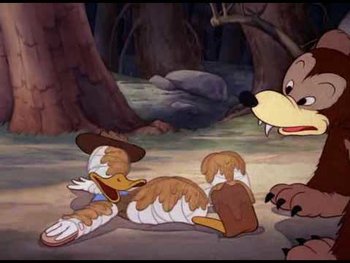 Good Scouts is a 1938 animated short film from Disney, directed by Jack King.

Donald Duck is taking Huey, Dewey, and Louie on a scouting trip through Yellowstone National Park. His attempts at being a good scout master go awry, as he spectacularly bungles minor tasks like chopping down a tree or setting up a tent. Upset when his nephews laugh at him, Donald splashes himself with ketchup in a poorly considered attempt to fake being injured. This leads to further disasters involving a jar of honey, a bear, and a geyser.