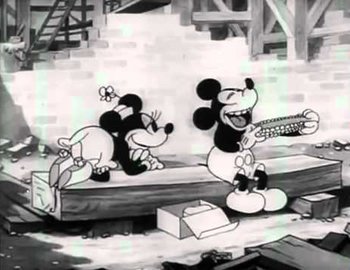 Mickey Mouse is working as a steam-shovel operator at a construction site. Minnie Mouse shows up pushing a food cart selling sandwiches for 15 cents. Mickey and Minnie flirt but they are interrupted by the attentions of Mickey's boss, Pegleg Pete, construction site foreman. Pete eventually forces his intentions on Minnie, forcing Mickey to come to the rescue.

Pluto the Pup also appears in this short but only sits around the construction site.