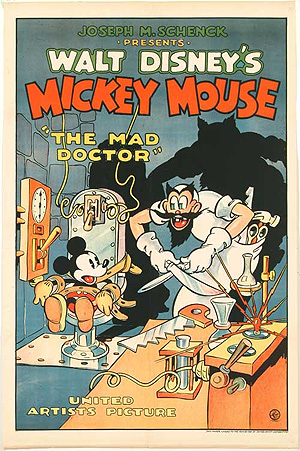 The short is darker than this poster makes it out to be.
I'm a raring tearing wizard when it comes to cutting up,
I can graft a chicken's gizzard on the wishbone of a pup.
And here's the great experiment I'm just about to tackle,
To find out if the end result will bark or crow or cackle!
Muahahahahahaha!
— The Mad Doctor's Villain Song
Advertisement:

A 1933 Mickey Mouse short that, while not known for being particularly innovative, is quite popular among Classic Disney fans for its sheer dark, macabre tone.

As with the earlier Disney shorts The Skeleton Dance and The Haunted House, this short's macabre tone was its own undoing; many theaters refused to show it (and was even completely banned in England), even though Mickey was at the height of his popularity at that point. However, the short has managed to become much more popular in recent years for the same reasons it was initially shunned.

This short was the inspiration for the later Mickey Mouse short Runaway Brain, and was remade as an entire level in the video game Mickey Mania. Epic Mickey also features the Mad Doctor prominently as a key villain (called "The Mad Doctor"), a side-scrolling Nostalgia Level themed to the short, and even the original short itself as an unlockable bonus. It also loosely inspired the storyline "Blaggard Castle" in the 1930s Mickey Mouse newspaper comic strip by Floyd Gottfredson.