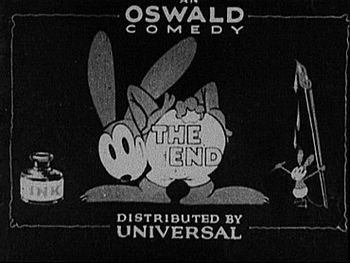 While Disney has created many iconic cartoon characters throughout the decades, we must never lose sight of one thing, that it was all started by a... rabbit?

The original cartoon star of animation duo Walt Disney and his longtime friend and partner Ub Iwerks note  if one doesn't count Julius the Cat), Oswald the Lucky Rabbit was once an all-but-forgotten, but very important, character in the History of Animation. Despite how obscure he remained for many years, his presence would wind up having a large impact on the future of the cartoon industry as a whole, laying the groundwork and paving the way for Walt Disney's future projects which would change animation forever.

In the waning years of the Silent Age, Walt Disney was — for lack of a better term — a nobody. Thrice, he had attempted to enter the field of animation, and all three efforts had led to dead ends: first, Walt's doomed Newman Laugh-O-Grams studio; which was followed by his equally-doomed follow-up series Lafflets; and then, by the slightly more successful live action/animation-blending Alice Comedies series. Finally, distributor Winkler Pictures got Walt and Ub a contract with Universal Studios. Walt, Ub, and their staff put together a pilot starring Oswald, called Poor Papa. Though Papa didn't impress Universal's management, a series of Oswald short comedies were still given the greenlight, and the Disney staff got right to work, with Oswald's official debut coming in the short Trolley Troubles (1927).

Still inspired by his viewings of Charlie Chaplin films, Winsor McCay's Gertie the Dinosaur, as well as Otto Messmer's Felix the Cat, Paul Terry's Aesop's Film Fables and Max Fleischer's Out of the Inkwell, Walt began striving for higher-quality animation and more dynamic use of rubber-hose animation, as well as much heavier emphasis on personality, story-based gags, and much more attention to story — this made the series a huge advancement over Walt's earlier Alice Comedies. While the animation was not quite up to par with the competition, be it technically or drawing wise, Oswald was rife with inventive gags and animation, and benefited from crisp pacing and feel-good premises. Oswald himself, like his successor Mickey, was a likable, scrappy but otherwise rather nondescript character. Contributing to Oswald's success were animators that would later claim their own stakes in the future of the medium, including his right-hand man and top animator Ub Iwerks (who not only animated, but handled the overall key poses, timing and art direction) Hugh Harman, Rudolph "Rudy" Ising, Norm Blackburn and Rollin "Ham" Hamilton, Friz Freleng, Les Clark among more esoteric names like Ben Clopton.

While it didn't reach the level of success of Fleischer's Koko The Clown or Messmer's Felix the Cat, the Oswald cartoons quickly became a hit series with the public. Oswald was even the first Disney cartoon character to receive his own tie-in merchandise (e.g., candy, stuffed animals, and pinback buttons)! Walt finally had a hit cartoon star, and it seemed like nothing could go wrong...

But alas, his success with Oswald was not to last. In 1928, Disney got into a hassle with Charles Mintz, then de facto boss of Winkler Pictures during negotiations for the second season of Oswald shorts. When Disney asked Mintz for a 20% budget increase (so that he could continue improving his animation standards), he was told not only that he would receive no budget increase, but that he had to accept a 20% budget decrease. And then in a massive blow, Mintz informed Walt that he had been secretly hiring away most of Walt's animation staff under a new contract, and as the rights to Oswald were owned by Universal, Walt was left with no bargaining chip (in fact, it has been said that Charles Mintz actually chose the name for Oswald out of a hat). So Mintz gave Disney an ultimatum: take the budget cut and loss of staff control, or lose the right to use Oswald altogether.

We all know how this turned out, folks. After completing the remaining Oswald cartoons they were contracted to make, Walt, his brother Roy, Ub, and the two apprentice animators who'd stuck with them, Les Clark and Johnny Cannon, left Winkler and Universal altogether. Walt, devastated by the ordeal, learned from there on out to be his own boss, and to always make sure that he owned the full rights to every character he created.

That, and this ordeal led him and Ub to create their own Captain Ersatz for Oswald when they started Walt Disney Productions: Mickey Mouse.

Meanwhile, back at Universal, Charles Mintz got a second season of cartoons made starring Oswald, but tensions between himself and Universal president Carl Laemmle were starting to boil over - specifically, after the overnight success of Mickey Mouse, Laemmle was more than a little upset that Mintz had let Disney walk away from the studio, and an incident in which Mintz got into a very nasty altercation with Universal vice president of production and close Laemmle friend and protege Irving Thalberg did not help matters. After negotiations to bring Walt Disney back to the studio failed,note  apparently learning nothing from the last time, Mintz's offer was basically to pay Disney a little more per short, but that Universal would completely own the rights to Mickey Mouse and Mintz would have control over Disney's studio; Walt very politely told Mintz to shove it as well as the second season of Oswald not nearly doing as well as the first, Laemmle reminded Mintz that he didn't own the rights to Oswald either, and Mintz was fired from the studio in 1929, prompting him to form his own cartoon studio for Columbia and do his own Krazy Kat cartoons!

Later on, Walt Disney would say working with Mintz improved his knowledge of business and that Mintz helped him develop a desire for high quality in cartoons.

For the third season of shorts, the character was brought in-house and handed over to Walter Lantz, a former Winkler director who would now open a studio of his own, after he won the rights to Oswald in a poker game. Over the next few years, Oswald became the headlining star of his studio and continued to star in moderately successful cartoons, at least prior to the mid-30's. Lantz, with the help of industry veteran Bill Nolan and young staffers like Tex Avery (who would occasionally direct a few shorts in Nolan's steed), took the Oswald series into a more cartoony, fantasy driven direction than what Walt had done with him, distinguishing Oswald from being merely Disney's take on Felix the Cat. The animation became much more loose and organic than Disney's product due to Nolan's fast speed, a compensation for Lantz's low budgets on the series, and the tone of Lantz's shorts shifted to improvised, freewheeling musical-oriented fests, with plenty of off the wall animation to boot. Oddly, Oswald had no regular voice actor in the Lantz era (apart from a period of about a year-and-a-half early on, when Pinto Colvig regularly served as his voice), and studio staff would just take turns voicing him.

By the mid-30's, Lantz gradually drew Oswald away from his cartoon roots and started making the series into a more cutesy, family-friendly like series, obviously in an attempt to emulate Disney's successful cartoons. As such, the character's popularity began to decline; appearances in color, as well as a few redesigns (at first making him more kid-like, then much more like an actual rabbit) did little to halt the slide. Lantz began launching other short subject series in an attempt to replace the Oswald series, but none of them were successful. By 1938, Oswald's popularity had dwindled enough to where Lantz decided to put the series on hiatus.

In 1943, Lantz attempted to resuscitate the Oswald series via one short, The Egg-Cracker Suite, where the character now sported yet another heavily overhauled redesign — only to find a cartoon industry that the cutesy hare was completely unsuited to. By this point in time, Disney parodies and fast-paced comedies, as well as Screwball Squirrel-type characters, were all the rage — including Lantz's own new star, Woody Woodpecker. As such, the now-domesticated Oswald was given the shaft as a series star altogether, after lasting an impressive 192 short subjects. His last cartoon appearance would be a brief cameo along with Andy Panda — Universal's second major cartoon star — in the 1951 short The Woody Woodpecker Polka. And aside from comic appearances, occasional TV reruns, the occasional history book anecdote, and two cameos in Christmas In Tattertown, the character fell into total obscurity, doomed to be a forgotten relic in animation history...

Or at least, that was how it seemed — until 2006, when things finally got better; In exchange for trading Al Michaels, a sportscaster, to NBC Universalnote Al Michaels was traded to NBC's Sunday Night Football, as ABC lost the broadcast rights to Monday Night Football which moved to ESPN, replacing their version of Sunday Night Football in terms of prominence of games broadcast; also included in the deal were some rights to Olympics footage and Friday broadcasts of the Ryder Cup for ESPN, Disney acquired all of the rights to Oswald and his shorts (excluding the post-Disney Universal cartoons), and in 2007, they reintroduced the world to the character via a two-disc DVD collection called Walt Disney Treasures: The Adventures of Oswald the Lucky Rabbit. A handful of the Lantz Oswalds were also included on the two Woody Woodpecker DVD sets released around the same time and a further two of them appeared on The Criterion Collection's DVD and Blu-Ray release of King of Jazz about a decade later.

As if things weren't good enough already for the old bunny, he made his full comeback, as the older half-brother of Mickey, in the 2010 video game Epic Mickey and with the announcement of Disney+ (their upcoming streaming service), Disney has announced that Oswald will have his first animation series

, his first involvement in cartoons since the late 1940snote Not counting the Mickey Mouse cartoon Get a Horse! which featured him as a cameo., though said show would end up getting scrapped in production as revealed by Matt Danner.

Obviously, no relation to My Uncle Oswald or Oswald the Octopus.

Contrast Felix the Cat and Bosko, the Talk-Ink Kid (which, incidentally, was created by two of the animators on the Disney Oswalds, Hugh Harman and Rudy Ising).

Oswald fits way too many animals in his tiny trolley.

Oswald fits way too many animals in his tiny trolley.