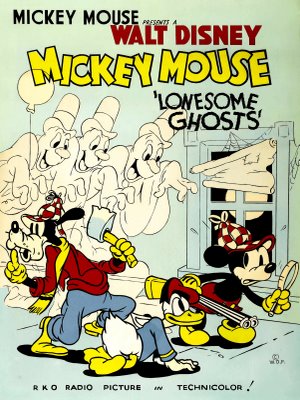 "Here are Mickey, Goofy and Donald; the world's first ghost busters. They're about to have a close encounter of the weird kind."
—The Magic Mirror, DTV Monster Hits
Advertisement:

One of the most popular Classic Disney Shorts, this Mickey Mouse cartoon from 1937 is centered around Mickey, Donald Duck and Goofy, who are running a Ghost Exterminating business as they are tricked into looking around a haunted house by the titular quartet of ghosts, who proceed to unleash their wrath upon our heroes. Unlike previous shorts themed around spooky stuff, Hilarity Ensues.

On a side note, these ghost characters (or at least ghosts similar in appearance) would later make an appearance, not in a Disney cartoon, but in a Walter Lantz cartoon "A Haunting We Will Go", featuring the Mel Blanc voiced Lil' Eightball being tricked into coming into their house. That short was also directed by the same director of this short, Burt Gillet.

It has been included as part of A Disney Halloween and Mickey's House of Villains.

Tropes Used By This Short: