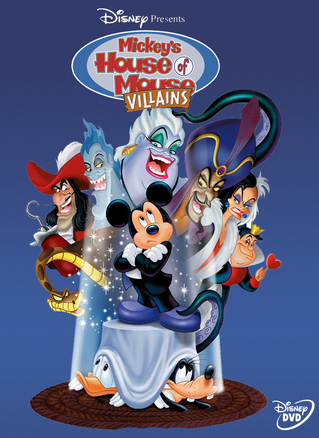 "You've had your fun, you've made your play, but every rodent has his day!"
"Raise your mugs, you thieves and thugs!
Join the rabble-rousing crowd!
It's our house now!"
Advertisement:

The overarching story is that it's Halloween at the House of Mouse, and the Disney villains have tired of Mickey Mouse's run of the place. Jafar forms a Legion of Doom that help him overthrow Mickey and take over the House at midnight, albeit while still showing cartoons as entertainment. Mickey and his staff now have to battle Jafar for control of the House.

Not to be confused with the House of Mouse episode, "Pete's House of Villains," which was not Halloween themed, but parts of the film were used in four other episodes, all premiering after the movie came out. Followed by the all-original Mickey, Donald, Goofy: The Three Musketeers in 2004, and in a Halloween context, via the 2006 Halloween episode of Mickey Mouse Clubhouse.

Mickey's House of Villains contains examples of the following tropes:

It's Our House Now

The various Disney villains take over the House of Mouse.

It's Our House Now

The various Disney villains take over the House of Mouse.