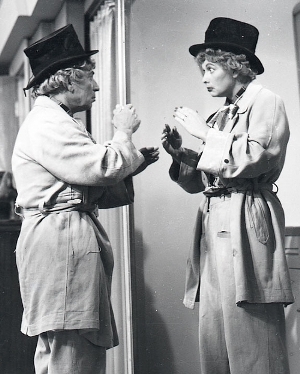 Lucy and Harpo take their time to reflect off each other.
When someone attempts to be a mirror image of another person by standing behind a glass pane, sometimes only an empty frame or a gap in a row of mirrors, copying their movements exactly.
Advertisement:

Sometimes this is to hide the fact that they have broken the mirror, and they don't want the other character to find out.

In cartoons, this is usually played for laughs with two characters that look nothing alike, with the mark trying to catch the "mirror image" out and the foil managing to pull off a perfectly synchronised act. If the act is convincing enough to work, expect the mark to attribute glaring differences to simple illness, drinking, or staying up too late. It can also be used very effectively to hide from a pursuer, especially if you happen to be an Evil Twin.

Another variant is when two Identical Strangers meet each other for the first time. This is also sometimes done when someone is flawlessly disguised as the person he is impersonating or vice-versa, or even if the impersonator is only wearing a convincing rubber mask but leaving the rest of the body exposed.

A similar setup is used when the character seen by the audience isn't the character seen by the other characters (e.g., a "Freaky Friday" Flip situation, or a person using a glamour to hide his true form). If Bob is hiding in Alice's body, sometimes the show will continue to show us Bob, but have everyone react like they've seen Alice, and the Mirror Routine is a decent way to clarify what's going on.

Unfortunately, since mirrors have traditionally been a way to see through a glamour (e.g., how Dracula doesn't reflect), there are two variants here, one the inverse of the other: Either Bob is the true person (or at least the soul) and Alice-in-the-Mirror is what others see, or Bob is what others see and Alice-in-the-Mirror is his true form. Whichever you use, establish it well.

In Real Life, this is almost impossible to do convincingly. If you've ever done basic drama in school then you've probably done this exercise and know just how hard it is to synchronise your actions with those of another actor, even with proper forward planning.

See also Stand-In Portrait and Wallpaper Camouflage. Compare with The Mirror Shows Your True Self. Not to be confused with Mirror Match.

Was Hitler really that stupid?

Was Hitler really that stupid?