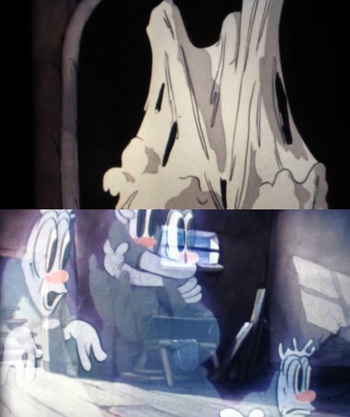 The haunters become the haunted.
"Generally speaking, when scary things get scared? Not good."
— Xander Harris, Buffy the Vampire Slayer

It's one thing to Punch Out Cthulhu. It's something else entirely to scare the living bejesus out of him. This is a trope for when someone — or something — is frightening enough to scare things that would usually be an object of terror themselves. If someone can scare demons, monsters, and Eldritch Abominations, they're probably a force to be reckoned with.

Can equally well be played straight or Played for Laughs — for example, as a Scared of What's Behind You bait-and-switch gag.

All too likely to happen when a Food Chain of Evil is in effect. Break the Badass is when this happens to more human entities. May overlap with Mook Horror Show for sufficiently monstrous mooks. Compare Even Evil Has Standards for when the horror is morally outraged at what he's seen.

See also Always a Bigger Fish, The Worf Effect, Eviler Than Thou.