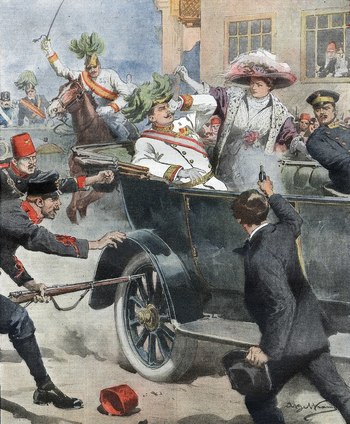 The Shot Heard Round the World
"Ronnie Kray, one of the two Kray Twins who basically run organized crime in London, commits the murder he'll finally be sent away for when he walks into the Blind Beggar pub and shoots George Cornell in the head... Kray would manage to get away with this for three years by virtue of the fact that nobody was actually stupid enough to testify against a man who walked into pubs and shot people dead, this being a sort of tautological behavior."
— El Sandifer

So there's the Evil Overlord sitting on his throne when a figure in black suddenly appears looking like Death himself. He strikes a fatal blow and the crowd is so shocked that no one makes much effort to stop the assassin. As was noted by the eponymous assassin of Day of the Jackal, assassination is relatively easy; getting away is the hard part. However, this is the opposite, a Refuge in Audacity on the assassin's part, which no one minds because it is just that cool or they're simply dumbstruck.

Aiding this is if the victim so unpopular that Bodyguard Betrayal occurs. The people supposed to provide security either stand by and let it happen or help out. This would definitely make the escape easier.

If the target employs Swiss Cheese Security, they deserve it.

There is some Truth in Television here, as oftentimes the assassin is intended to be caught or killed. This is called a "lost" assassination and is popular among terrorist groups, the insane, and groups manipulating the insane for plausible deniability.