You may be looking for the 2021 fantasy novel The Way of Kings, by Louise Searl. 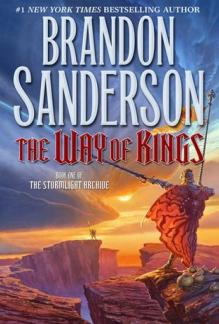 You must find the most important words a man can say.
"Life before death, strength before weakness, journey before destination."
— The First Ideal of the Knights Radiant
Advertisement:

The Way of Kings is the first book of The Stormlight Archive, the Epic Fantasy series by Brandon Sanderson. The Way of Kings introduces the world of Roshar, with its Bizarre Seasons and Hostile Weather, as well as the cast of characters, including Kaladin, a doctor-turned-Child Soldier-turned-slave; Dalinar, a Warrior Prince who adheres to the old codes of honor; Shallan, a young noblewoman from a house on the brink of ruin; and Szeth, a Human Weapon who accepts any indignity or abuse.

The story revolves around the Kingdom of Alethkar, a group of ten princedoms recently united as a single nation under Gavilar Kholin, who managed to force the other nine highprinces under his rule, becoming the first King of Alethkar in centuries. Some years later, Gavilar encounters a mysterious people while on a hunting expedition — a free and independent group of parshmen, the docile and listless Slave Mooks used by Alethi. Dubbing these people the Parshendi (parshmen who can think), Gavilar quickly signs a peace treaty with them... and is just as quickly betrayed, when the Parshendi have Szeth assassinate Gavilar on the very night the treaty was signed. Outraged, the Alethi — led by Gavilar's son (and the new King of Alethkar) Elhokar — immediately declare war on the Parshendi. Pursuing them to the Shattered Plains, a group of tightly-clustered plateaus separated by a labyrinth of deep, narrow chasms, the Alethi settle down to outlast the Parshendi in a war of attrition.

The main story picks up after several years of virtual stalemate on the Shattered Plains. Dalinar (Gavilar's younger brother and Elhokar's uncle) is one of the ten highprinces overseeing the war effort. Kaladin is brought into the camp of highprince Sadeas and forced to work as a bridgeman — the physically punishing and suicidally dangerous job of carrying the bridges used to span gaps between plateaus, even in the face of Parshendi archers. Shallan, away from the Shattered Plains, seeks to become a student of the princess Jasnah (Elhokar's sister and Dalinar's niece), a renowned scholar and infamous heretic against Alethkar's primary religion of Vorinism; however, her ulterior motive is to steal Jasnah's Soulcaster (the only such artifact known to be outside the control of the Vorin clergy) and use it to save her impoverished noble house. Meanwhile, Szeth travels across Roshar on the orders of several changing masters, whose orders he is honorbound to obey regardless of how personally loathsome he finds them.

The Way of Kings has Kaladin as its focus character; while the book shifts between all four plots, Kaladin's is clearly the primary story, with less focus on Dalinar, Shallan, and Szeth (respectively, from most to least).