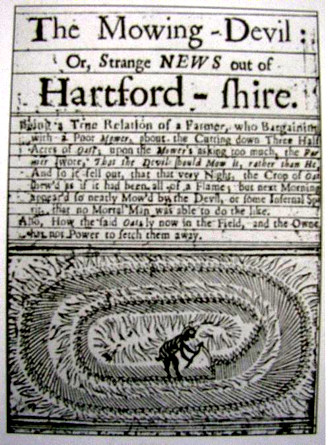 This 1678 pamphlet (relating a farmer's Deal with the Devil gone bad) may be the first recorded claim of paranormal crop circle activity.
"To be fair, it might not be two blokes with a plank of wood and some string, it could be aliens. But if it is... where did they get the plank of wood and the string from?"
— Harry Hill's TV Burp, on Danny Dyer: I Believe in UFOs
Advertisement:

Crop circles are large geometric patterns that appear in fields of crops, usually corn (because cornfields are creepy), and are created by flattening the stalks in such a way that each individual one remains undamaged. They are usually presented as being paranormal or supernatural in origin, with the most common explanation being that they were created by extraterrestrials, although the reasons behind why aliens visiting Earth would want to do such a thing varies. This area is a staple of publications such as Fortean Times.

In fiction, the question of who's going to pay for the vandalized crops never seems to arise. Not to be confused with crop rotation.

Compare/contrast Aliens Steal Cattle, a much more comedic way for aliens to attack a farm, and First Contact Farmer, where farmers are the first people aliens meet.