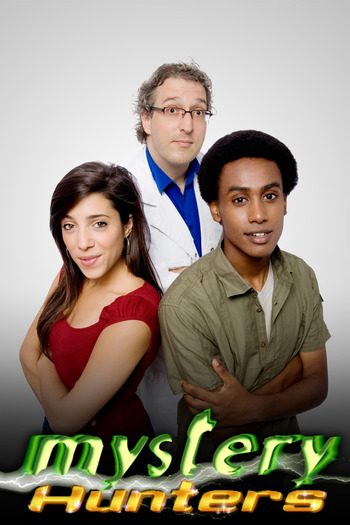 Mystery Hunters is a Discovery Kids and YTV program starring Araya Mengesha and Christina Broccolini, two teens who investigate mysteries of things that go bump in the night and try to find both the rational scientific explanation and the mysterious explanations of the unknown. Their investigations have included ghosts, aliens, vampires, werewolves and so on.

In between their investigations, David Acer AKA Doubting Dave provides his own segments. V-files has him explain weird and potentially supernatural situations scientifically based on viewers' questions while Mystery Labs has him show you how to create your own experiments and craft projects based on the mystery of the week.

The series ran for four seasons between 2002 to 2009, airing a total of 78 episodes. It has an Indian counterpart called, naturally, "Mystery Hunters India." It aired in 2012, a few years after the original ended. Unlike the original series where the show explore mysteries around the world, this version is more local, looking at Indian myths.