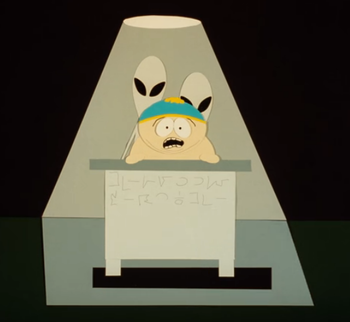 "Then I was lying on a table, and these scary aliens wanted to operate on me."
Advertisement:

Stan, Kyle, Cartman and Kenny are four foul-mouthed little boys from a Coloradan hick town. During a typical morning waiting for the school bus, Kyle's baby brother, Ike, gets abducted by aliens — who are connected with several mysterious cow mutilations and abducting Cartman and putting a communication probe up his butt.