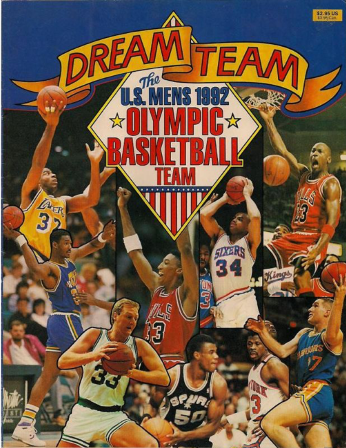 A Dream Team is spectacularly good at what they do. They are the absolute, best-ever people in some field, gathered to tackle a problem. After all, if one person who's the best (or at least one of the best) at something is simply "great," then an entire team of them is even better, right?

To get a Dream Team, sometimes the constraints of time and space are relaxed. What if Sherlock Holmes, Ellery Queen, Nero Wolfe, Lew Archer and Lord Peter Wimsey teamed up to solve crime? Answer: detective Dream Team. What if Superman, Batman and Spider-Man teamed up to save the world? Answer: Superhero Dream Team (See I'm a Marvel... and I'm a DC for a version of this).

A good Dream Team has members who, while having majored in the same field, all minored in different specialties. Expect a Plot Tailored to the Party.

Dream Teams create a dramatic problem since it is difficult to find a worthy enemy. Typical opponents include nature and inherently difficult tasks. It is much easier, for example, to commit a crime than to solve one. Occasionally, an opposing Dream Team or Big Bad may be invoked; this is a classic approach for superhero Dream Teams, since by definition a best-ever supervillain is the complement of a best-ever superhero. Additionally, Dream Teams can be their own worst enemy, with egos and infighting over approaches limiting their potential effectiveness. There is often a teamwork Aesop here.

Expect the first act to feature an Avengers Assemble or Putting the Band Back Together scene allowing the characters to be introduced, and their specialities and personalities briefly established.

Not to be confused with the 1989 film

starring Michael Keaton and Christopher Lloyd or the British soccer club based Soap Opera Dream Team which occasionally used this trope but more often ran with a Ragtag Bunch of Misfits. Also not to be confused with Mario & Luigi: Dream Team.