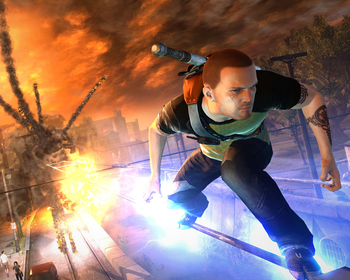 Surprisingly common in anime, shonen especially, is the tendency to run on power lines when racing to get somewhere. While at first doing this seems perfectly reasonable - after all, why run along the ground where you would have to follow the roads when you can just use the power lines and go straight there - there is a slight problem. Power lines are designed strong enough to support their weight, plus survive reasonably strong wind, plus maybe some snow and ice for colder areas. Making them stronger would be wasteful. Low-voltage low-power lines may well support crows, but almost certainly not human beings doing acrobatics. Higher voltage adds the danger of electrocution when you touch two wires at once or a wire and a grounded object, like a tangent tower. Things are even worse with high tension power lines; according to the History Channel, even the crews who maintain the things, with all their training and protective gear, occasionally die working on these. For multi-kilovolt lines you don't even need to touch two wires: touching one and being a few centimetres from another could be enough to short them through air and your body. Though some high-tension lines have on top a lightning guard wire, which is safe to touch, it again isn't expected to hold human weight. Needless to say, Rule of Cool reigns supreme.

Many a character with electric powers does this, both because their presumable Required Secondary Powers of electro-proofing keep their survival grounded in plausibility, and because it's conductive to their nature.

A more realistic variation may involve any other kind of overhead wires and ropes, from suspension bridge cables to clotheslines.

A close cousin of Roof Hopping and typically takes Le Parkour up a notch. Not to be confused with the country line-dance of the same name...or the decidedly non-country "Electric Boogie" that inspired it.

People who can do this tend to also engage in Roof Hopping and I Have the High Ground.

A Sister Trope to Ride the Lightning. Compare Tightrope Walking.

Cole is able to slide on electric cables with his electric powers.

Cole is able to slide on electric cables with his electric powers.