Literature / Way of the Tiger 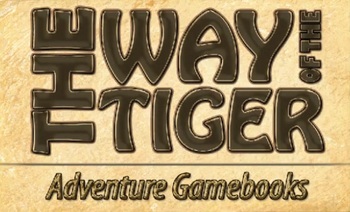 Series Logo
"You are Avenger, a ninja trained in the Way of the Tiger, a lethal master of unarmed combat who must confront the ultimate evil to avenge the death of your foster-father."
Advertisement:

Way of the Tiger is a series of Gamebooks written by Mark Smith and Jamie Thomson, set on the fantasy world of Orb. The player takes the role of a Ninja named Avenger, who seeks revenge against the killer of his mentor and father-figure, a quest that ends up drawing him into larger events on his world's stage.

The series originally ran for six books and ended in a massive cliffhanger where Avenger fell into the bottom level of The Bowels of Orb in the final paragraphs, leaving his fate in question. However, a Kickstarter campaign to revive the series succeeded

, and work is being done to make hardcover versions of the books, as well as a prequel and a finale. At this time, the prequel and the six books have been done

Interestingly, this series was not the first appearance of Orb. The setting was previously used in the 11thFighting Fantasy book, Talisman of Death, which was also written by Smith and Thomson. Several characters from Talisman of Death return for Way of the Tiger.

Way of the Tiger provides examples of:

Alternative Title(s): The Way Of The Tiger