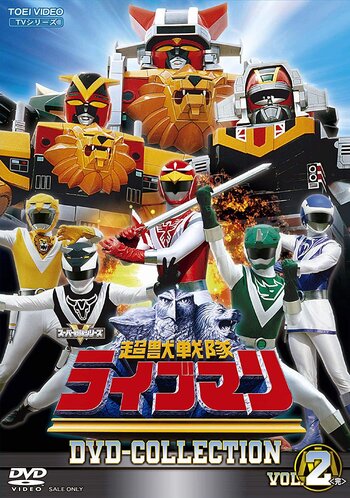 The full team, and yes, the blue one is a girl for the first time.

"My friends! Why have you sold your souls to the devil?!"

Three students from Academia Island, an elite school funded by the U.N. for the purpose of researching space flight, are tempted by promises of power from the evil Great Professor Bias. They flee Academia Island, killing two of their classmates in cold blood during their escape.

Two years later they return as officers of "Volt", an evil cult who believe humanity should be conquered by the intelligent. Having changed their bodies, minds and names, they use their new powers to destroy Academia.

In response, three of their former classmates use cutting-edge power suits (originally designed as a new form of space suit) to fight against Volt as "the warriors who protect all living things": Liveman. They are later joined by two additional members: the siblings of the two classmates that died at Volt's hands, out for revenge.

Example of:
Comfort the Dying