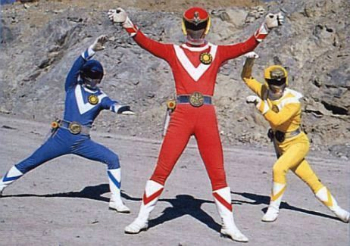 Yes, there's no ladies in this team, and the team number will never grow to five. Just this once, we swear.
Kagayake!* Shine! Taiyou Sentai! Sun! Vulcan!
Advertisement:

Taiyō Sentai Sun Vulcan (Solar Squadron Sun Vulcan) is the fifth Super Sentai series,note and the final one to be co-produced by Toei and Marvel Comics which aired from 1981 to 1982.

Three soldiers from the Guardians of World Peace (GOWP) are assembled to become Sun Vulcan. Their mission: to defend the world from the machinations of the Machine Empire Black Magma.

The only Super Sentai entry that continued the storyline from the previous show until Avataro Sentai Donbrothers 41 years later, it featured the first animal-themed team of rangers, as well as the first sword-wielding red ranger. It is also notable for having the Sentai team with the fewest members (with just three full-time heroes instead of the usual five) and the only one without a female ranger.

Example of:
Planning with Props