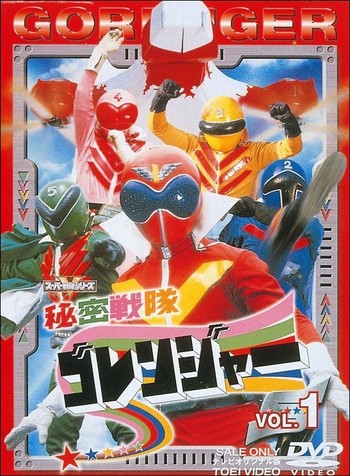 The original five that started it all.

Himitsu Sentai Gorenger (Secret Squadron Gorengernote A portmanteau of the words Goren which means "five members" in Japanese and "ranger".) was the first entry in the Super Sentai franchisenote Although rights issues briefly forced Toei to consider Battle Fever J the first in the late 80s and early 90s, airing from 1975 to 1977, lasting 84 episodes and a movie (longer than any of its successors). The Title Theme Tune was performed by Isao Sasaki and Mitsuko Horie.

The evil terrorist group known as the Black Cross Army is threatening the world, so the Earth Guard League (EAGLE) is set up to defend it. The Black Cross Army destroys EAGLE's bases in Japan, but five secret agents survive, using superpowered battle suits to become Gorenger, and take revenge against the forces of evil.

On November 2, 2020, Seven Seas Entertainment announced that it will be releasing the Gorenger manga drawn by Shotaro Ishinomori. The manga was released on April 20, 2021.