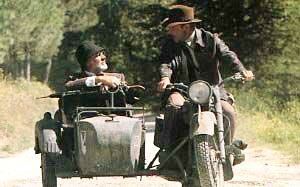 Two Badass Bookworms in nice hats, on a Cool Bike, with one of these. What more could you want?
Advertisement:

Badass Bikers with their Cool Bikes, are usually stereotyped as loners thanks to the fact that their rides are usually good for about 1 or 2 people. Some nix that though, and add a Cool Sidecar as an option for their rides. Allowing them to have another passenger or at least let their current companion have something more comfortable to sit on. However those still more interested in being loners have the options of having the sidecar used for extra storage. Mainly because there's only so much cargo a bike itself can carry.

When some good old blood-pumping action is required, passengers of these sidecars have to fend off pursuers hot on their tail or people on the front trying to blockade their escape, so that the rider can put more focus on making sure they don't crash along the way. There's also the good old Gangland Drive-By too. Usually the rider of the sidecar has to be armed in some way, most of the time they are just armed with some kind of firearm (preferabbly a rapid firing one), although some are unlucky and end up wielding a melee weapon instead. However, it does let them give out a pretty nasty drive-by swing or even outright Motorcycle Jousting, if they're armed with something long enough to be a polearm.

Some bikers however, take an extra step and decided to mount some Cool Guns on their sidecars. Allowing the passengers to be their gunner while the biker rides. Usually the mounted armaments is a type of machine gun, mostly because motorcycles are naturally made for Hit-and-Run Tactics, alongside some good old spray-and-pray.

The idea of mounting weaponry on sidecars dates way back to World War II, thanks to Nazi Germany of all people. They got the bright idea of repurposing their BMW motorcycles, by sticking a sidecar onto them and turning them into light reconnaissance vehicles.

Thus, expect BMW R75 or the competing Zündapp KS 750 with an MG42 machine gun-bearing sidecar attached for good measure as well. To make appearances in World War II-related media, usually being rode by those Nazi Bikers.. Although just because it's used by bad guys doesn't mean it has to be exclusively for them. Sometimes our heroes decide they want a piece of that action and commandeer one for themselves, using the mounted MGs on the Nazis themselves.

Although in some rare cases however, the sidecar itself is turned into a weapons platform with no need for a gunner.