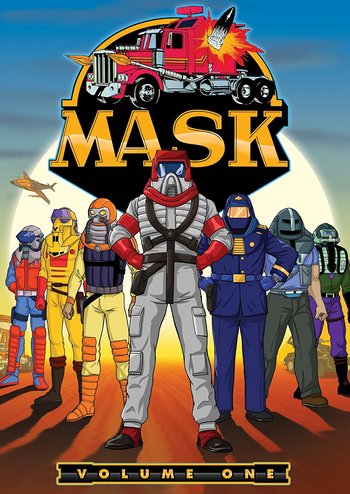 "Illusion is the Ultimate Weapon".
Advertisement:

M.A.S.K. was an animated television series directed by three Japanese studios - KK C&D Asia (Season 1, with Hanho Heung-Up as an uncredited assistant), Studio World, and Ashi Productions (both Season 2)note with Trans Arts on photography for the later season and produced by the French-American DIC Entertainment (Jean Chalopin & Andy Heyward). It was based on the toyline of the same name sold by Kenner.

A total of 75 episodes were broadcast from 1985 to 1986 in syndication. One of many cartoons produced during the 1980s as a vehicle for toys, M.A.S.K. (which is an acronym for the Mobile Armored Strike Kommand), was essentially a mashup of G.I. Joe (with the whole "opposing factions of terrorist and peacekeepers" thing) and Transformers (with the converting vehicles; here, The Gimmick wasn't transforming robots, but seemingly ordinary vehicles that turned into heavily-armed fighting machines). It featured a special task force featuring an array of characters, led by Matt Trakker, with transforming vehicles engaged in an ongoing battle against the criminal organization V.E.N.O.M. (an acronym for the Vicious Evil Network of Mayhem), with an emphasis on super-powered helmets called "Masks" worn by the characters.

The series, like with these types of shows, focused mainly on the vehicles and characters from the toy line. More characters were introduced, both from M.A.S.K. and V.E.N.O.M., as the line expanded. There is a storyline difference in the mini comic books which came with each toy. In the comics, Miles Mayhem knew the identity of Matt Trakker and had originally helped start the M.A.S.K. team but betrayed him later by killing Matt's younger brother Andy.

Besides the cartoon and toys, there were also various merchandising products like sticker books, coloring books and party goods to capitalize on the success of the show, as well as a Comic-Book Adaptation from DC Comics.

In that series, the M.A.S.K. team is sponsored by an organization called the Peaceful Nations Alliance, with a guy named Duane Kennedy as their rep. Their exact relationship wasn't explained. Duane and the P.N.A. did appear in the cartoon, although in a smaller role. Similarly, V.E.N.O.M. didn't exactly have a clear goal as to what they did. They weren't the typical villains who sought global dominance, and their schemes mostly revolved around illegal activities and the like. The comics tried to give them a more fleshed-out background, where they were seemingly the main force of a bigger evil group called Contraworld. Like with M.A.S.K. and the P.N.A., their relationship wasn't explained in detail; what Contraworld was trying to use the agents for wasn't clarified either.

Twenty-five years after MASK left the airwaves, the line was "adopted" by G.I. Joe when a new Matt Trakker action figure was released as part of the Joe figure line under the name "Specialist Trakker", with a character bio explaining MASK and VENOM as special ops units of the Joe Team and COBRA.

In 2011, Hasbro released a one-off comic titled Unit: E, which attempted to crossover Hasbro's more famous lines such as G.I. Joe, Transformers, Jem, and other, not-so-famous (or even out-of-left-field) properties like Micronauts, Action Man, Stretch Armstrong, and even Candy Land. Here

◊, it seemed to have been roughly merged with another Hasbro property, C.O.P.S. (1988); it took place in a futuristic, (even more) dystopian Detroit, where the government has left the Motor City's people to fend for themselves, resulting in widespread chaos. An ancient workshop belonging to the "League of Ancient Wheelmen" was found and used by Matt Trakker (now a police officer) and a new team of civil servants, who use the tech they found to help Detroit's citizenry and combat the decay, as M.A.S.K.

December 2015 saw Hasbro and Paramount announcing the formation of a shared Hasbro movie universe (using the G.I. Joe movies as a starting point), which will include this series, as well as the Micronauts, the Visionaries and ROM. 2016 had IDW Publishing announcing a rebooted comic based on the series, to be part of the new Hasbro Comic Universe, starting with the crossover Revolution; Miles Mayhem here was previously a member of Joe Colton's Adventure Team, and parts of the M.A.S.K. tech was reverse-engineered from Decepticon Triple-Changer Blitzwing (M.A.S.K. having started as an anti-Transformer initiative operated by the Earth Defense Command as a subdivision of the GI Joe Team); after the events of Revolution, a M.A.S.K. ongoing started, with Matt and the rest of M.A.S.K. now on the run, trying to track down Mayhem ( who had turned traitor and been working with Baron Karza; when that went south during the Revolution, Mayhem vanished, but has now reappeared with several former M.A.S.K. agents, now operating as V.E.N.O.M). Tropes for that adaptation can be found here.

In January 2018, Paramount announced that M.A.S.K. had been dropped from the Hasbro cinematic universe—but in April they revealed that there would still be a M.A.S.K. film, which would be directed by F. Gary Gray (Friday, The Italian Job (2003), Straight Outta Compton, The Fate of the Furious) and developed as "a contemporary subculture movie with a youth empowerment angle".

Not to be confused with The Mask (or its cartoon adaptation), or the docudrama Mask starring Cher (it doesn't help that the latter film also came out in 1985).