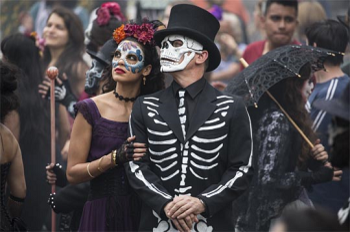 James Bond doesn't like to miss a good Día de Los Muertos when he's in Mexico.
"Need to stop using my reality altering ability to make every day Mardi Gras."
— #705 of Things Mr. Welch Is No Longer Allowed to Do in an RPG
Advertisement:

Whenever anyone goes to The Big Easy— New Orleans— it's nearly always during Mardi Gras. If it isn't actually Mardi Gras, then the Dénouement will occur in a costume/parade storage warehouse. This is probably due to the writers having no sense of geography.

This goes for any city or country with a famous festival; for instance, a large number of episodes set in Mexico take place during Di­a de los Muertos or Cinco de Mayonote although Cinco de Mayo is a minor holiday in Mexico itself and is not even celebrated in some regions, a large number of episodes set in Spain take place in Pamplona during the Fiesta de San Fermin (of "the running of the bulls" fame, complete with seemingly obligatory Thundering Herd of toros), and any episode set in Brazil (thus Rio de Janeiro) or Venice wanders into the Carnival. And while the trope isn't really applicable to New York City, there are still a disproportionate number of stories set in the city during the Feast of San Gennaro, or during the Macy's Parade, or in Times Square on New Year's Eve. San Francisco seemingly hosts an excessive number of Pride Marches; one might think that the entire LGBT community is unemployed, or that they have somehow managed to make parade-marching into a source of income. It's also usually Chinese New Year whenever a show's characters end up in Chinatown (with the characters hiding from danger under a lion train), and cities with large Irish communities — Boston and Chicago, for example — play host to frequent St. Patrick's Day Parades. However, it's never Bon when characters visit Japan, nor is it the 4th of July when characters visit America...

Logically, you would think this trope would not apply if the characters are visiting a given area specifically to attend its popular festival, but this is often the only time said area is ever mentioned in fiction, as if people don't have mundane lives in New Orleans.

It's worth noting that "Mardi Gras" is French for "Fat Tuesday", and that it originated as a Catholic tradition of feasting before the fasting period known as Lent, which starts at midnight as Fat Tuesday becomes Ash Wednesday. It did not originate in New Orleans, and the American tradition most viewers are familiar with actually originated in Mobile, Alabama. It is part of a much larger worldwide Carnival event, and Wikipedia has a page on it here

Also note: Carnival (which Mardi Gras is the last day of) is a rather long season, with parades spread out over about two months with the various New Orleans area cities (Slidell and Metairie especially). Though this doesn't excuse the trope entirely, there are 40+ parades that run through the season, so having the character(s) visit during a Carnival parade is not as coincidental as it may seem—especially if they visit from January to March—as there are other parades that occur on random weekends. The Krewe of Boo, for instance, runs the week before Halloween. And then you have Southern Decadence, a huge annual gay men's festival and parade, during Labor Day weekend. Though not all parades during the year use the same purple-green-gold coloring, having that distinctive color scheme instantly sets the stage for the rest of the scene.

The meteorological equivalent might be It's Always Sunny in Miami, despite being in the single rainiest state in the US. Also see It's Always Spring. The equivalent in local landmarks (rather than events) is the Eiffel Tower Effect.