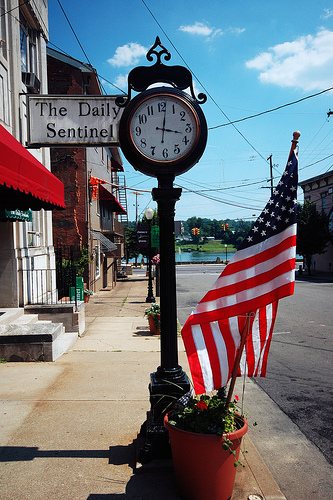 "Ain't that America?"note Photo taken in Pomeroy, Ohio
Clark: It always takes folks from the city a bit of time to decompress. Fortunately for you, this weekend Smallville is holding the annual Corn Festival. We'll get to see the Corn Queen Pageant, the Husk-Off, the Corn-o-rama, popcorn, cream corn, corn on the cob; we are in luck.
Lois: Oh, be still, my heart.
— Lois & Clark, "The Green, Green Glow of Home"
Advertisement:

Basically, if an American film or TV show doesn't take place in a famous big city, it will be set in some version of Everytown, America. Everytown, America is a usually fictional town or small city containing pastel suburbs, a single elementary/High School (depending how old the main characters are) with the same name as the town, and a main street or town square of some kind. Everyone likes hot dogs, apple pie, and Chevrolet. Mandatory attire is flannel with blue jeans, or a bolo tie if you're rich. Most people will be friendly except for the Pointy-Haired Boss, the Alpha Bitch or the Jerk Jock. Anyone worse than that will be an invader from some big city or The Government. It is often a Close-Knit Community, and almost Everyone Went to School Together. Usually (though not always), the members of this community identify as (or are at least implied to be) some variety of Christian, and they all attend the same church.

Where is Everytown? Well obviously it's in Eagleland, but if the specific state is given at all, it's particularly likely to be somewhere in New England, the Great Lakes States, or the rural South. Expect it to have hot summers all abuzz with cicadas, and snow on Christmas.

Nothing Exciting Ever Happens Here (or at least it didn't until the aliens / vampires / witches / commies / weirdos showed up). The town's history, if discussed at all, will probably be very simple (usually it will have been named after whoever founded it — there might be a statue of him) and everyone living there will be familiar with the story. The characters may become routinely involved in city affairs, which will usually consist of convincing the city council not to tear down some historic building or to clean up the local park so all the children can happily play there. The townsfolk can cause it to be a Quirky Town, but just about everybody you meet will be friendly and polite. It's usually the home of The All-American Boy and the Girl Next Door.

For such an average place, Everytown seems to become a City of Adventure surprisingly often, and occasionally masks a Town with a Dark Secret. If featured in a TV series fond of Special Guests, celebrities may visit the town a disproportionate number of times.

To be fair, there are a lot of towns like this in the U.S.A. (particularly in the Midwest and Great Lakes states), but it also taps into a very powerful vein of nostalgia about what kind of town many Americans wish they lived in.

Together with Down on the Farm, this is one of the main components of Flyover Country, though that trope is usually more dismissive than idealized. See also Where the Hell Is Springfield?, with which this trope often overlaps. Contrast with No Communities Were Harmed, which involves a fictionalized version of a specific real city, and Informed Location, in which the location is mention and irrelevant.

The citizens of Denton start their day by singing their anthem.

The citizens of Denton start their day by singing their anthem.