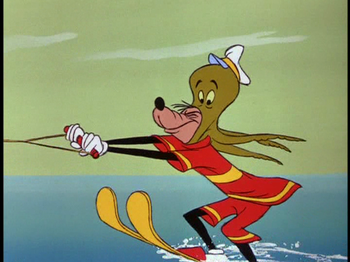 It stars Goofy in one of his last "everyman" shorts. This one is a lampoon of suburban men's obsession with motor boats. "Mr. X", it turns out, is an "aquamaniac" with a boating problem. Unable to resist the temptation, Goofy buys a motor boat and goes out to the beach with his son. After managing to drive his car into the ocean, Goofy accidentally enters a waterski race, his son driving the boat at death-defying speeds, Goofy dragged along behind, eventually crashing into an octopus which holds on for dear life as the two of them careen to the finish.