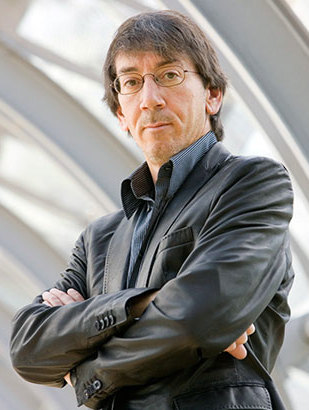 Let's put it this way; his games are a bit addictive, and they're not like many other games you've played, in the sense you have to build something as opposed to wiping out masses of Mooks, although cities and civilizations can still get attacked from the disaster button's effects.
Advertisement:

Anyway, William Ralph Wright (born January 20, 1960) is the creator of mostly the Wide-Open Sandbox and Simulation Game genres; in fact, his first game, SimCity, is the mother of such genres. He first proposed SimCity in 1986, but the company to which Wright showed it thought the idea was too bizarre and unusual for gaming of the time. It wouldn't be until 1989 that SimCity would be available to the public, coming from the then newly founded Maxis Studios.

To be honest, the idea was an incredible success. SimCity would spawn more sequels and two other famous titles: The Sims and Spore.

According to his business cards, his official job is "Llama consultant".

And fun fact: Nintendo immortalized him in the SNES version of SimCity with Dr. Wright, an advisor character who Nintendo fully owns, and has even appeared in the Super Smash Bros. series in various cameos, most notably as an assist trophy.