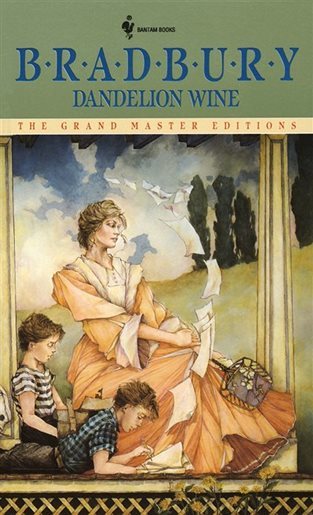 "A magical evocation of boyhood and summer."
Advertisement:

In the fictional town of Green Town, Illinois, 12-year-old Douglas Spaulding lives in a large three-story house with his 10-year-old brother Tom, their parents, and a few relatives. Rather than having a straightforward plot, Dandelion Wine is a loosely-connected series of vignettes revolving around the Spaulding boys, their friends, and other residents of the town.

The story begins one early morning in late June. Doug Spaulding wakes up before sunrise while the rest of the town is still asleep. As he peers out of the cupola window, he surveys the whole town and begins telling everyone to wake up. As if obeying Doug’s commands, lights go on, people wake up, and slowly the whole town begins coming to life. Doug finally finishes his morning ritual, content that he has ushered in the summer of 1928.

A departure from Ray Bradbury’s typical science fiction work, Dandelion Wine is a nostalgic and semi-autobiographical novel based on the author’s boyhood in Waukegan, Illinois

. It offers vivid details of small town life in 1920’s America in what can be described as a Norman Rockwell

Before his death, Ray Bradbury released a sequel called Farewell Summer, about how the boys try to stop time.