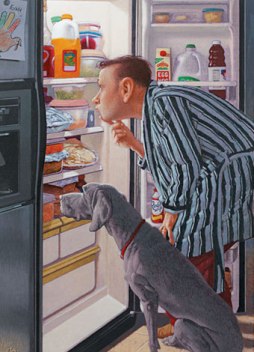 A common occurrence in American sitcoms and other comedy shows is to have some character get up in the middle of the night in order to have a snack. This may be due to the character being a Big Eater, or being on a diet and attempting to cheat on it without anyone noticing.

Sometimes two or more people will have the same idea and bump into each other. May either be a plot point or a Running Gag.