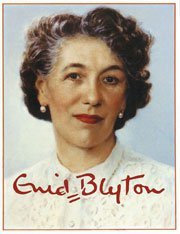 "I always wanted to write for children."
Advertisement:

Enid Mary Blyton (August 11, 1897 - November 28, 1968) was a prolific author of English children's literature, producing around 800 books during her forty-year career, which were many people's first introduction to literature, and which still sell well to day. To date her books have sold over 600 million copies worldwide.

Her writing is mostly set in an idealised version of pre-war England, and reflects the attitudes of the time, using some now-dead tropes about race, sex, and social class, commonly mocked when Blyton is parodied. Often, her characters spend days roaming across the countryside, without any trace of adult supervision, eating lavish picnics and having jolly adventures fighting assorted villains.

While her work was highly influential (even all these years later, those who have read Blyton can't help but be reminded of the St. Clare's and Malory Towers books while reading about Hogwarts) there is a fairly large amount of Values Dissonance strewn liberally among her books, and it has come under controversy, although even that hasn't stopped her books from still being widely bought and read today.

Many of her works have been televised or filmed. The Famous Five is the one most commonly referenced, while Noddy is popular worldwide for its numerous Animated Adaptations, as well as a children's sitcom based off them. Blyton also wrote hundreds of stand-alone novels. Her books still sell around eight million copies a year. The Famous Five books alone sell more than two million copies a year, according to The Other Wiki.

In 2009, BBC aired a television exclusive documentary Enid which stars Helena Bonham Carter as the author. The film goes into detail about her relationship with her family (mainly her daughters) and her career as a children's book author.

There are two fansites, Enid Blyton.net

and the Enid Blyton Society

This author's books provide examples of: