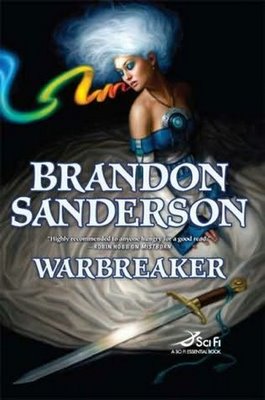 "Not everything is what it seems."
Advertisement:

In a world where magic is ruled by three aspects (color, voice, and Breath, the essential power of one's soul), where those who die nobly can return to life and be worshipped as gods, the minor kingdom of Idris wants to stay as far away from such things as possible. They wear muted colors, usually a simple gray or white, and look upon the use of Breath magic as an abomination. But in the neighboring kingdom of Hallandren, where the immortal God King rules over a court of deities returned from the dead, sinister plots are stirring and many are calling for war against the "rebels" in Idris.

The only way to avert it is for the king of Idris to honor an old treaty and send his daughter to the God King's court to be his bride. He has trained up his beloved daughter Vivenna to do this, but when the time comes he pulls a switcheroo and sends his youngest daughter Sisirina instead. When Siri arrives, she's immediately pulled into a tangled web of plots and betrayals within the court of the Gods. Meanwhile, Vivi, at loose ends now that the husband she went through a lifetime of Wife Husbandry for has married someone else, sneaks away to Hallandren to save her little sister from the ruthless God King and take her place. It doesn't quite work out that way, especially when the mysterious Vasher, a fighter with a black sword that speaks to him and enjoys killing people, takes notice of her...

, as Sanderson performed a brave experiment with this novel: as he wrote and re-wrote it, he published each draft on his site, so that aspiring authors and/or curious readers could watch the story evolve artistically and technically. (For obvious reasons, he also kept a changelog.) As a result, spoilers abound; you know where to go if you want to get the story first. (Alternately, buy it on Amazon, where it has been officially published.)

For more works in The 'Verse in which this takes place, see The Cosmere.