A Match Made in Stockholm 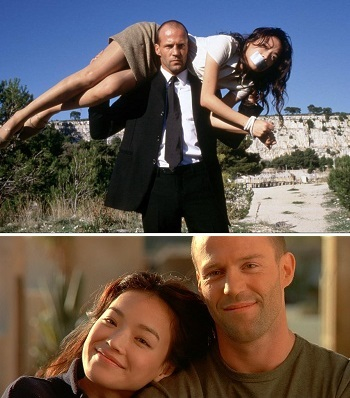 He really swept her off her feet.
Ben Rogers: Say, do we kill the women, too?
Tom Sawyer: Kill the women? No; nobody ever saw anything in the books like that. You fetch them to the cave, and you're always as polite as pie to them; and by and by they fall in love with you, and never want to go home any more.
— Adventures of Huckleberry Finn
Advertisement:

A form of Meet Cute, where two characters who inevitably end up becoming friends/comrades/lovers first meet in this very uncordial way. One of the characters, normally through a misunderstanding, ends up taking the other character hostage/kidnapping them. Their interactions are normally played for comedy, with plenty of snarking and arguing. If they're together for a while, it's expected that somewhere along the line, the hostage ends up developing feelings for and grows attached to their kidnapper, seeing signs that the kidnapper is not all bad. Whether or not initially they are on opposing sides depends, but it normally ends with either one of them defecting to the "correct" side.

If it's more on the side of romance instead of plain friendship, expect a point where the kidnapper lets the captive go, only for the captive to often decide to stay with the kidnapper. This can occasionally seem forced, since people often forget the most important factor in a Stockholm relationship — the act interpreted by the captive as kindness.

The implications of this frequently make it an Unequal Pairing, frequently overlapping with Power Dynamics Kink.

Compare Abduction Is Love when the kidnapping is done for the purpose of mating and romance ensues nonetheless. Contrast Rescue Romance and Bodyguard Crush.

Not about matches made in the capital of Sweden, though this trope can still apply over there.