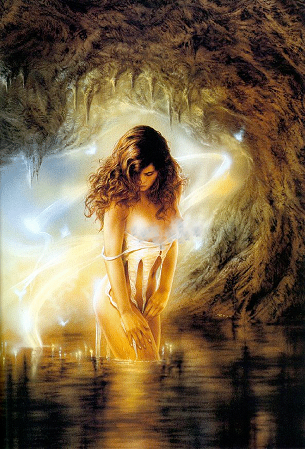 Aphrodite.
Thalia: Wow. Apollo is hot.
Percy: He's the sun god.
Thalia: That's not what I meant.
— Percy Jackson and the Olympians
Advertisement:

When the gods are divine in their beauty as well as power.

Invariably, a Love Goddess is always a Hot God. Note also that several goddesses (from a multitude of pantheons) were seen as befitting of the Lady of War/Amazonian Beauty archetypes, so it seems divine power may be telling of how attractive power is.

Of course, gods are supposed to be models that concepts are based on, so whatever concept they represent is one that they have, a thousand times more than any mortal could. So it would be a no-brainer that a goddess of love - or beauty, fertility, marriage, or pretty much any concept related to human interaction - would have unearthly beauty. A Fertility God may also fall under this; after all, there's a reason people want to make babies.

Not to Be Confused with something that you put ketchup or jelly on. Or Sex God, although the two can overlap. Contrast Grandpa God, the one with the long white beard (though even they have their admirers).