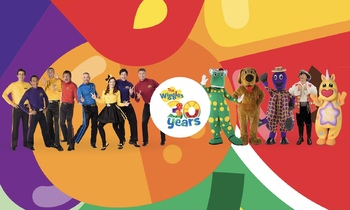 The Wiggles are an Australian children's band, founded in 1991 but who gained international popularity during the 2000s. Greg Page, Anthony Field and Murray Cook met as early childhood education students at Macquarie University in the 80s, while Field was a member of 80s rock band The Cockroaches alongside Jeff Fatt; the three classmates undertook a university project of their own design intended to create music aimed at children with educational value, and Fatt was brought in as a pianist. A few years and a deal with The ABC later, and The Wiggles were born.

Over the years they have produced over fifty albums and home videos, several television series and a feature-length film, with another one in the works. The ABC has broadcast the majority of their shows and been in charge of distributing all their albums and videos in Australia. In the United States, the program initially aired on Fox Family, then moved to Playhouse Disney, but were eventually supplanted there by the Imagination Movers, after which they moved again to Universal Kids.

Besides the band themselves, the majority of Wiggles media also includes a secondary cast of friends; Dorothy, a green-and-yellow dinosaur girl that eats roses, Henry, a purple band-conducting octopus, Captain Feathersword, a Friendly Pirate, and Wags, a big brown dog. In 2019, the group added a fifth friend, Shirley Shawn the Unicorn.

It says something about the Wiggles' importance within Australian culture that when the original yellow Wiggle, Greg Page, left the group due to an illness in 2006, it made national headlines for weeks. The majority of Australians will know at least three of their songs and sing them, as well as give you the trademark Wiggle finger pointing gesture unashamedly, an almost unique thing in the world when it comes to children's music.

After Greg's departure, he was replaced as the Yellow Wiggle by Sam Moran, who stayed until January 2012, when Greg returned. In December of 2012, however, three of the original members - Greg, Murray, and Jeff - retired from the group (though they continue to be involved in the development of the band), and were replaced by three younger band members, Simon Pryce as the red Wiggle, Lachlan "Lachy" Gillespie as purple, and Emma Watkins as yellow, with Anthony staying.

In 2021, the same year Fruit Salad TV was released introducing a new culturally-diverse cast, it was announced that Emma would be retiring and passing on her yellow skivvy to Tsehay, who previously wore red alongside Kelly (yellow), John (purple), and Evie (blue).

And we're all fruit salad, yummy yummy
All in the same bowl
Feedback