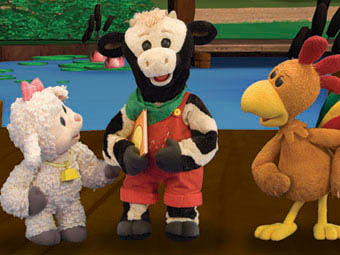 Wilbur is a children's television series combining puppetry, animation and live-action segments. The show focuses on the adventures of a group of Wilbur, a calf, and his young barnyard companions Dasha the duck, Libby the lamb and Ray the rooster. In each story, the group deals with basic issues familiar to young children such as learning to take turns, dealing with scary noises at night and learning about the world around them. When Wilbur wiggles, he finds a book which helps him or his friends to solve their problems.

Wilbur was originally created as a pilot in 2001, and based on an earlier property created for direct-to-video by a group of moms, but was commissioned as a full series for Discovery Kids/TLC's Ready Set Learn! block and Kids CBC in 2007. The series continued to air as a once-weekly holdover in the wee morning hours of Monday on The Hub, the network that replaced Discovery Kids, until late June 2012. Two episodes were also released on DVD, as part of the Ready Set Learn! compilation releases. The series also had an official website, though it has not been updated since sometime before Discovery Kids was converted to The Hub. Sometime after the show's removal from The Hub, the license on the domain expired and was not renewed. The Internet Archive version can be found here

The series was done by Mercury Filmworks, in conjunction with Chilco Productions.

Not to be confused with Charlotte's Web, which also features a non-bovine character named Wilbur.

Wilbur provides examples of the following:

"That's why I always say, books are moovelous!"