NOTE: Due to the prevalence of Late-Arrival Spoilers for seasons 1 and 2 of the show, all spoilers are unmarked. 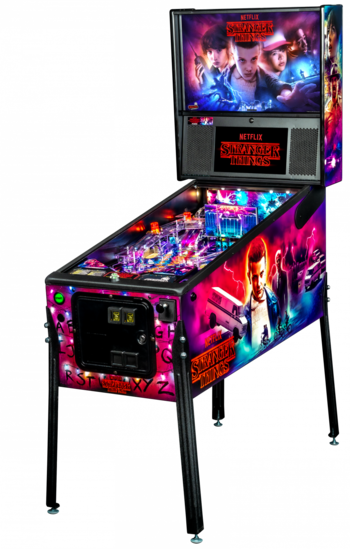 Stranger Things is a pinball table designed by Brian Eddy and released by Stern throughout 2020 (after being revealed near the end of 2019). It is notable as the first pinball machine that Eddy has designed in over twenty years (his last one was Medieval Madness in 1997).

The premise is based on the first two seasons of the Netflix series of the same name, with the player going through several key events from both of their stories in order to save Will and keep the denizens of the Upside Down at bay. Crucial to this is the Demogorgon, which sits in the center of the playfield and must be fought in several dedicated modes, as well as the Demodogs. Furthermore, at any moment the player can get transported into the Upside Down itself, requiring careful shooting to return back to reality. Getting past all of these will lead to the Final Showdown to close the gate between the worlds once and for all.

In addition to the Demogorgon toy, the game's Premium and Limited Editions are notable for their innovative use of a projector as a gimmick. Certain parts of the playfield (most prominently a large screen that hides the Demogorgon from view) are transparent and have context-specific visuals projected onto them to contribute to immersion. The same models also feature a "telekinetic" ball lock that holds balls on the back wall through magnets. Every version of the game has an optional Game Mod (sold separately) installing UV lights that activate during certain modes (usually related to the Upside Down or the creatures that came from it), revealing hidden aspects of the playfield artwork.