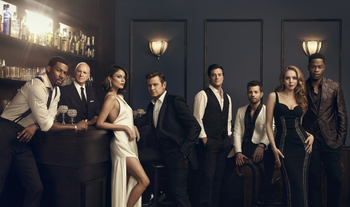 The Beautiful Elite are fun to watch. There's something satisfying in describing their Conspicuous Consumption, dressing them in beautiful and expensive Unlimited Wardrobes, and the shady or otherwise dealings that keep them rich. There are so many settings in which the rich can play as well — they can be favored Old Money nobles in a Costume Drama, popular kids at a prep or Royal School, celebrities living large, cutthroat executives of high-powered companies, drug lords, heads of state, politicians, or politician-wannabes. Hence this trope, which is about when the majority of characters in a work are Rich People (maybe even Fiction 500) and the plot milks their glitz and glamour as much as it can.

One reason for this is that drama is heightened with such characters. Since they usually don't have to worry about financial problems (except for the Broke Episode), they can devote their time to all the Luxury Tropes the writers want to add in, like hosting lavish dinner parties on yachts, remodeling their Big Fancy Houses, living it up in affluent communities like Beverly Hills or the Hamptons, going on extravagant shopping trips and holidays, participating in high-stakes gambling, attending horse ballet, and other fun activities only the one percent can afford. This isn't necessarily good, however — the work may be out to portray them as out-of-touch and or stupid for the sake of comedy or drama, or as mean, ruthless, or corrupt so they can maintain or grow their finances.

" was coined to describe society's almost morbid fascination with media depicting how the rich live, especially in a time of increasing income inequality. Because of this, works that utilize this trope will likely have a middle-class or poor character as an Audience Surrogate, reacting with shock or disgust as the real-life audience would to all the over-the-top wealthy shenanigans — see Penny Among Diamonds. This may cross over with Informed Poverty when even the supposedly not-rich surrogate still has the lifestyle trappings of their well-off peers.

See also Aristocrat Team for when it's a team full of rich people.