Film / Get a Clue 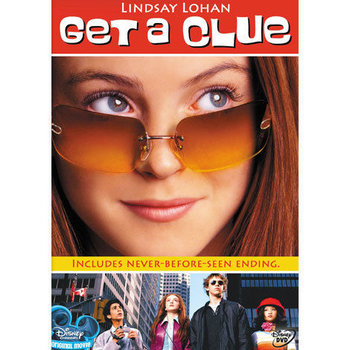 Get a Clue is a 2002 Disney Channel Original Movie starring Lindsay Lohan as Lexy Gold, a high-school student who investigates a mystery after one of her teachers goes missing.

Lexy Gold lives among the wealthy and elite of New York. She prides herself on her ability to get the scoop and serve it up in her school newspaper's gossip column. She competes for status on the newspaper with Jack Downey, the editor. When a photograph Lexy has taken of her teacher, Mr. Walker, is published in the city's daily paper, he goes missing and his car is found in the East River. With help from Lexy's best friend Jennifer and one of her schoolmates Gabe, Lexy and Jack set out to solve the mystery behind the disappearance.

Their teacher, Miss Dawson, becomes involved as she and Mr. Walker were having an affair. Jack receives a message from Mr. Walker about a scholarship. Lexy and Jack search his old apartment, where they run into Detective Charles Meany, who is searching for Mr. Walker. Jenn and Gabe watch Miss Dawson at Gabe's house with a video camera to keep an eye on her. Lexy and Jack later meet Mrs. Petrossian, who is Mr. Walker's mother, at her house. They discover that Mr. Walker changed his identity after being accused of stealing $10,000,000. Mr. Walker later receives a letter from the real person who stole the money, framing Mr. Walker...