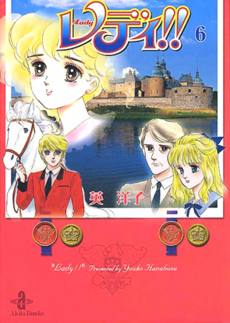 Lady!! is a Japanese shōjo manga by Youko Hanabusa. It was published by Akita Shoten in the magazine Hitomi Comics from 1987 to 1993 and collected in 12 tankoubon volumes. The manga series was adapted into two anime television series, entitled, Lady Lady!! and its sequel Hello! Lady Lynn, produced by Toei Animation Co., Ltd.

Its main character is a five-year-old girl named Lynn Russell, the daughter of an English Lord (Sir George Russell aka Viscount Marble) and his Japanese second wife (Misuzu Midorikawa). During The Roaring '20s, Lynn has lived all of her life in Japan, but when she's five her mom decides to travel to England with her so she can meet up with her dad. Too bad that, as Lynn and Misuzu were on their way, their car gets in an accident and Misuzu dies while shielding Lynn...

Lynn wakes up at the hospital and George is next to her. He doesn't tell her off the bat that Misuzu has just kicked it, though; since she's too young to properly understand death, he just tells her she's gone to a "far away place since it was God's will" and doesn't clear it up. Then he takes Lynn to the family home, Marble Mansion, where she has to adapt herself to the British way of life. Though she has the support of her father and her half-sister Sarah Russell, Lynn is bullied by her paternal cousins Thomas and Mary Wavebury, and the Wavebury's mother Baroness Madeleine doesn't like her either. However, even after properly realising that her mom has died, Lynn decides to not give up and promises to her mom's spirit and to herself to become a proper lady and reach for her happiness.

The early Lady manga/series has the following tropes:

The following tropes are more specific to the second part of the manga and the Hello Lady Lynn TV series: